Mark’s Tuckpointing & Remodeling, Inc. works hard to not just meet your masonry goals, but to exceed them! There are many good reasons to choose the professional services of our masonry contractors, here are a few of them:
• We have a fantastic standing of carrying out thousands of successful masonry repair projects throughout the Chicagoland area
• We are A+ rated with the BBB and have a 4.6 star rating on Google.
• Our masonry site manager will ensure your project receives the highest quality masonry work possible.
• We offer an absolutely FREE, no-hassle estimate
Don’t trust your masonry repair or masonry restoration to just anybody! Call Mark’s Tuckpointing & Remodeling, Inc., today, at 773-774-0444 and we will send a masonry professional to your Harwood Heights property to inspect your needs and provide you a very professional quote. 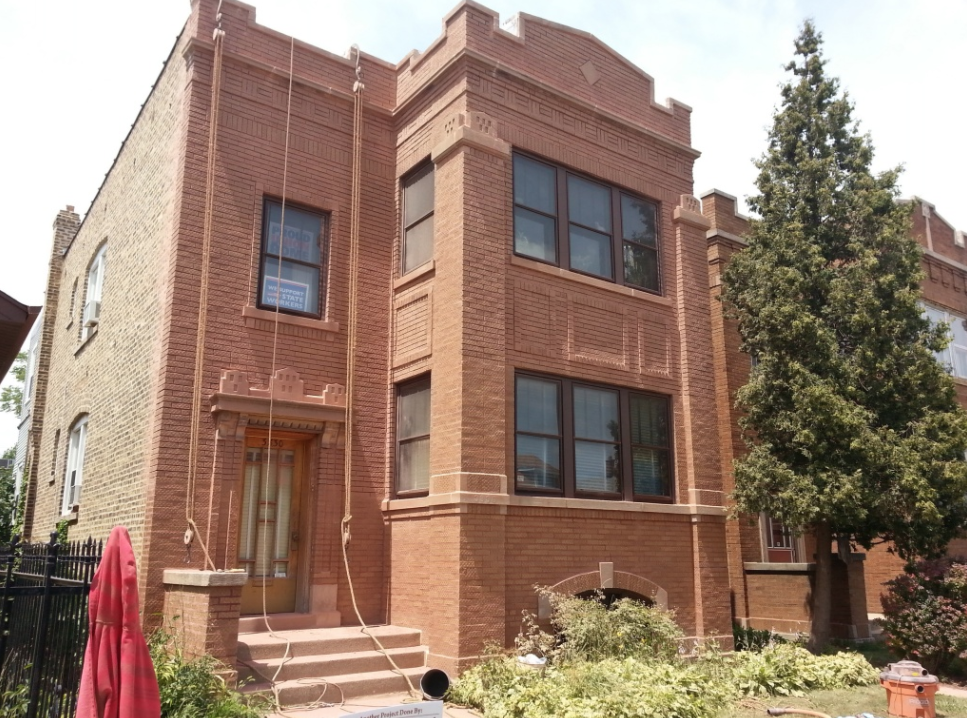 Wind and moisture are the major enemies of the mortar joints. These two factors can cause breaking up. The damaged mortar is washed out and it continues to use up. Sometimes even bricks become loose and fall out the wall.

Our hundreds of finished projects ensure our clients that tuckpointing projects in Chicago area will be of high quality. When you see a well-build brick wall or a chimney with perfect lines and symmetry, you should know that professional did it. Solid tuckpointing shouldn’t crack, chipp or peel up to 3 years.

If you need more information about our brickwork job – use contact form to get in touch. Or if you want to get a free estimate on next job – use our Online Free Estimate Form.

Have you been noticing cracks in your mortar? Those cracks are signs telling you that you need tuckpointing. It is important to get your tuckpointing repaired because water and moisture can cause the masonry of the walls to break down or deteriorate. Calling a professional to come out to your home or building is the best idea because they have many years of experience in tuck-pointing. We have over 30 years of experience in masonry and brick repair, installation, and replacement services in the Harwood Heights and surrounding Chicago area.

“Working with Peter at Mark’s Tuckpointing was excellent. I recently needed my chimney tuckpointed. I heard about Mark’s from my neighbor. I called the office to schedule an appointment for my job to be quoted. Peter called me later that same afternoon. He visited the house and quoted the job the next day. A contract was signed and the work was performed promptly. A little more supplies were needed to complete the job due to a cracked cap recognized once the crew started working, yet no additional $$ was charged. The crew showed up on time and the job was completed and cleaned up. Very Professional experience.”

They did complete tuckpointing on the top third of both sides of a 3 story building and spot tuckpointing in other areas on the sides and front.

A neighbor recommended Mark’s Tuckpointing to me saying they had done good work for them at a reasonable price.  I completely agree and was not only quite satisfied with the work performed, but thought the entire process from initial estimates to final invoicing was done professionally and very well. I had gotten estimates from 3 or 4 other firms, and Mark’s was competitive with the best of them.  What stood out was that their estimate was the most comprehensive without leaving room for differences of opinion or misunderstanding.  I worked with Peter, a representative of the firm, during this process and thought he did a fine job in working with me on final details and getting the work started. They were able to start the job within 2 weeks of my signing the contract and completed in just under 3 days.  A full-time crew of 3 headed by Casey did the actual tuckpointing which was very thorough and left me quite pleased with the workmanship and the way they handled the job.  For instance, at one point the scaffolding couldn’t be moved because of a neighbor’s gutter being in the way, and without missing a beat, Casey improvised and was able to use a ladder on the neighbor’s porch (with their permission) to create a makeshift scaffold.  It took about 10 extra minutes and allowed them to get to a difficult spot.  I thought they also did a thorough job in the places where “spot” tuckpointing was needed.  About 50-60 new bricks were needed in areas where not only the mortar but bricks had badly deteriorated.  They seemed to have addressed all of these bad spots. The crew cleaned up at the end of each day and seemed to do everything well.  I really can’t think of anything I would have had them do differently and would definitely recommend them to others.

“Peter was very helpful throughout the process. Him and his team did a great job tuckpointing and fixing our condo building’s gutter. Their price was reasonable and they did not try to convince us to do additional work (like some contractors did). We were very happy with the quality of their work.”